On 3rd November, 2003, I was privileged to hear Nelson Mandela address the very first Children’s Parliament in .  Having only recently been diagnosed with Prostate Cancer he spoke openly about his death.

In November 2003 I had the opportunity to join with Theological Educators from more thirty countries world-wide who had been brought together in by the Council for World , our world mission partnership.

’s very first Children’s Parliament was meeting at the same time in the same conference centre.  As the phone lines went down and it wasn’t possible to ring home rumours began to circulate that Nelson Mandela would make a visit.

The following are extracts from the journal I kept at the time.

We visited , the home of Nelson Mandela and the .   We got back to the Conference centre to discover the phone lines had gone down.

In all, a moving day.

Shame not to be able to phone home – all lines are blocked!

I had the opportunity to preach in a church in the morning.  At the end of the day I got into a couple of conversations with youngsters attending the Children’s Parliament.  By now rumours were circulating that Nelson.

Around supper I had some wonderful conversations with some of the youngsters who  had come for the Children’s Parliament.  Three 16 and 17 year old boys in particular were thoroughly enjoying the experience and looking forward with excitement in their eyes to the visit of Nelson Mandela tomorrow!

They aren’t the only ones.  Wouldn’t it be wonderful to round off the week by seeing (or even meeting!!!) Nelson Mandela?

“The wonderful thing about Nelson Mandela is the way he was able to forgive.”

So commented one of the leaders of the Children’s Parliament in a brief conversation by the squash courts.

There was an air of eager anticipation in the Conference Centre as our first morning session came to an end.

We broke for coffee and many of us hovered by the windows overlooking a new garden Nelson Mandela was to open.

There was a buzz of excitement as a bus arrived first.

Young people clad in prison clothes were escorted by their guards and stood in line waiting.

The security was thick on the ground.

We were held back behind closed, glass doors.

And then the car arrived and a frail yet strong silver haired 86 year old Nelson Mandela emerged.

The Security Guard waved us outside.

I followed … only to be called back.  Our session was about to begin and we must not miss it.

I heard my name called out.  I turned. But only for a moment.  This was an occasion not to miss and I was not going to miss it.

Out into the heat of the mid-day sun and a vantage point just behind the line of young offenders.  How close we were as Nelson Mandela greeted first representatives of the first South African children’s parliament whom Nelson Mandela was later going to address.

A woman whispered in my ear, ‘That’s Imolo,’ she explained.  ‘He is totally blind, and spoke so well in the Parliament yesterday he has been chosen to greet the former Presidnet.’ 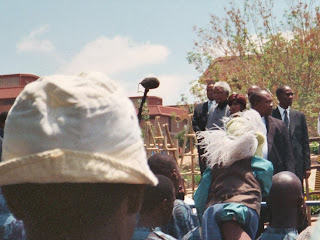 A photo call, a few words of greeting and Nelson Mandela came back down the path.

Then we realised that the young prisoners were in fact a choir.  In wonderfully rich looked as he stood looking at those young people.  It was at his insistence, so we were told, that a group of young prisoners should be bussed out to see him.

Nelson Mandela returned to his car and I slipped into our session.  We were sitting in silence reflecting on our few days together.  But I had already done that with the listening group.  I knew that for the next half hour the listening group’s report was going to be shared.

I could not concentrate.

And then I decided.  In the silence of the meeting I got to my feet and left.

“Aren’t you coming to the marquee to hear Nelson Mandela speak?” The question one of the excited staff members had asked me was ringing in my ears.

I followed the stragglers still making their way to the marquee.  Through a metal detector and my bag through an X ray machine (I hope my photos haven’t been lost!!) only to meet a steward.

“Aren’t you from the other conference?”

“Then you cannot stay: this is for invited guests only.”

I took my leave through the door on the opposite side of the marquee, and sneaked round the back to the side entrance I had passed through only moments before.

In the bright sun with other staff and onlookers I stood on tiptoe and watched as Nelson Mandela gave his address to the Children’s Parliament.

He spoke of the importance of children to the future of the nation.  In ringing tones he challenged them, and all of us, to fulfil their responsibilities as citizens and to be caring people.

He touched on violence, On HIV Aids and on sickness too.

“Talk about it!  Don’t keep it to yourself,” he said.  And then he spoke of having TB and prostate cancer.

“They keep telling me to go to the and have it treated.

“But I say, no!  What would people think of our doctors and nurses if I said they were not good enough to look after me.

“They are good enough and I will stay.

“When I die,” he said and corrected himself.  “If I die …” he paused and laughter swept through the marquee.  “if I did I hope to go to the place where I will meet old friends.  And when they greet me there I look forward to being directed to the room where I will meet my ANC friends.

“Then I will say, ‘Send my prostate gland suffering from cancer to the .  Their doctors are so wonderful; let them treat it then.  When they return it to me I shall be back to see how you are all getting on.”

With more words about the importance of caring he greeted the members of the Children’s Parliament and his speech was over! 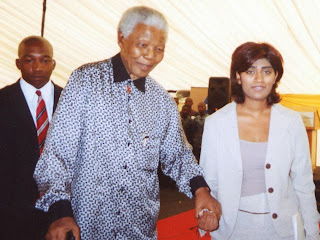 I returned to our session.  They were still discussing the Listening Group’s report.  I sat, half-aware of questions being put to the Group.  “Richard will answer that,” said the one chairing the session.

I grabbed the notes from the person sitting next to me, whispered to the chair as he walked up and gave me the microphone, “What was the question again?  And Just about managed to get by answering it and another question as best I could.

It turned out the wife of the chaplain from had also been there and she was pleased to know that I had heard the speech.

After boycotting South African fruit for so long, demonstrating against the Springbok’s Rugby tour in 1969, stopping the 70’s cricket tour and admiring Nelson Mandela’s photo on Mum’s mantelpiece through the 80’s, having attended that wonderful vigil on the day of his election (27th April, 1994) only a couple of days after Mum’s funeral … this was a day not to miss!

To see one of the world’s greatest statesmen and to hear him give such a powerful speech at the first gathering of ’s Children’s Parliament was something I would not have missed for the world!

A day to remember for a lifetime.

One last thing to do.

First to Felicity who got Phil to the phone to hear the exciting news of my meeting with Nelson Mandela!  Well, as good as a meeting anyway!!

It was so exciting that I rang Dave too on his mobile.  What a wonderful end to the day!

Telephone lines outside the centre opened again this afternoon.  Strange how they went down just before Nelson Mandela’s arrival and came alive again just after he left.

Security is security all over the world!

Posted by Felicity and Richard at 8:20 PM