You might have thought that it would be held up as a thing of beauty, as something good, wholesome, productive, full of energy, refreshing, life-giving, beautiful and wonderful.

In the story of Jesus the sea is the place where fishermen ply their trade, and at the climax to the story it is the place of a miraculous catch of 153 fish, causing nets to bulge as the fishermen disciples meet with the risen Lord Jesus Christ on their home territory, at sea in the place you would have thought they loved so much.

The sea is not only a place of beauty, it is also a place of menace, a place of fear, a place of destructive force that in spite of all human technological advances remains a fearsome place.

That more than its beauty figures large in the thinking of the biblical writers.

It is over the chaos of the deep that the Spirit of God hovers as creation brings order into what is frighteningly chaotic and dis-ordered.

In the beginning when God created the heavens and the earth, the earth was a formless void and darkness covered the face of the deep, while a wind, a spirit, from God, swept over the face of the waters.

The sea comes to represent all that cuts across the goodness of God. It stands for chaos, for terror, for destruction, and for fear.

Over against all that is destructive in the sea, lies God. The God who has the last word even over the raging sea and its sea-monsters.

It’s so easy to romanticise the sea, especially if you live inland as we do! I’ve always thought of those fishermen disciples as engaged in a very pleasant kind of occupation.

What if the fishing industry at that time were different? What if it is a fishing industry on an industrial scale that is being ruthlessly exploited to feed the insatiable appetite of a Roman conquering power that’s seeking to take a hold by a process of urbanization and commercialisation. 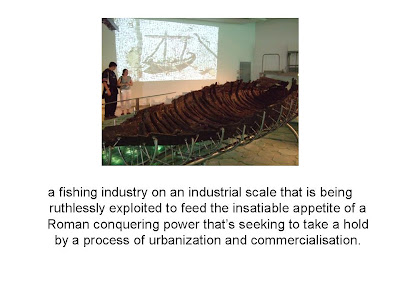 That’s what’s suggested by a remarkable discovery of a boat in a particularly dry year in the Sea of Galilee in 1985, coupled with the development of a major Roman urban centre on the shore of the lake in Tiberias and a liking for fish sauce that can only be produced by over-intensive fish farming.

Even the process of fishing is not quite so benign any more.

When they are out all night and don’t catch a thing – is it just a disappointment? Or is it back to those bad old days of knowing the consequences of not taking any fish … fearing the possible consequences of over-fishing?

There’s a dark side to the lives these fishermen lead.

It becomes even darker as you build into the story the picture created in Psalm 89. That’s a picture of a raging sea, of sea monsters who threaten life in the extreme.

Hiding in the stories of the Sea are some answers to those questions.

The meteorology of the area around the Sea of Galilee is fascinating: in a steep sided valley at 600 feet below sea level, you can see how the weather can change, the storms get whipped up out of all proportion to the tiny size of what is little more than a big lake.

Interesting though it may be it’s important to go beyond the meteorology as we read the story of Jesus stilling the storm.

Notice carefully what happens. How the disciples react. What Jesus does.

That gives rise to two questions: who has the last word? And what happens next?

A great wind storm arose. The wind rages to an unbearable extent. And that results in the waves threatening to swamp the boat.

the waves beat into the boat, so that the boat was already being swamped.

Secondly, notice how the disciples react

‘Teacher, do you not care that we are perishing?’

Their reaction begs Jesus’ question: ‘Why are you afraid? Have you still no faith?’

The feeling that all is lost, they are perishing gives rise to a fear that is all too real. And that fear is accompanied by loss of faith.

What does Jesus do?

He woke up and rebuked the wind, and said to the sea, ‘Peace! Be still!’

Then the wind ceased, and there was a dead calm.

That gives rise to the first question.

Who has the last word? The answer is in the final comment of the disciples.

And they were filled with great awe and said to one another, ‘Who then is this, that even the wind and the sea obey him?’

Against the chaos, the awfulness, the sheer dread of all that is chaotic in the world, Jesus has the last word … the word of Jesus, the word of Peace, prevails.

The story was treasured by those disciples, not out of any interesting in things meteorological, but because it resonated with the experiences they were to continue to have in lives that were all too conscious of chaos and storm.

Those disciples, not least out on the sea, were just like the rest of us. They wanted to be in control. That desire to control and be in charge is simply a natural human instinct. When things spin out of control and it is clear no one is in charge two things happen. Fear It’s frightening. Very frightening. And the second thing is ‘loss of faith’.

The raging wind, the terrifying sea is symbolic of all that is chaotic in the world.

It is something that can rage around us and sometimes be whipped up at a moment’s notice.

Personal circumstances in a life that is sailing along beautifully only for something to happen that seems to blow everything sky high out of the water. Where once there was order now there is chaos.

We are brought face to face with our own mortality. And that is frightening. It is so easy to lose faith.

Chaos takes a hold. We are so perishable. It is frightening. It leads to loss of faith.

Those disciples ever afterwards knew what they had to hold on to.

We too can hold on to the same thing.

In a personal way, that word ‘Peace, be still’ can have a quietening effect. A stilling. As a prayer it releases a sense of the presence of God … the God we believe in through Jesus Christ is ultimately greater than the storm. Difficult to describe, but very real when you experience it.

On a larger scale we have the invitation to hold on to the conviction that God will prevail, that Jesus has the last word … and that the last word is the word, Peace, be still. Our task then is to bring this peace into that world. We do support those congregational churches in Zimbabwe Felicity visited and told us about last week, in our prayers and in our fellowship. We are with those people working for peace in Gaza, in Palestine, in Israel. We are committed to Christian Aid and bringing help where it is needed most. That’s the task we have to do.

There’s one more dimension to this story that’s easy to miss.

The boat Jesus was in was not alone. There were ‘other boats with him’. It’s not a solitary fisherman’s boat. It is one of those boats that are part of the Roman conquest of this part of the world. They are part of that fishing industry exploiting those waters.

The fishermen disciples of Jesus in that boat have a new relationship with that whole process. They had once been caught up in it. They had been part of the commericalisation and urbanisation processs that had a stranglehold on their community. Maybe a reluctant part.

Jesus had called them to a different way. The way of discipleship in which exploitation of that kind was rejected in favour of hungering and thirsting for righteousness, in favour of being merciful, of pursuing the path of peace making.

They have to go over the waters, they still have to use the boats to get to the other side. They are not averse later to returning to their fishing. But no longer in thrall to the powers that be. Now as followers of Jesus Christ in the pursuit of the rule of God in the world.

That’s the key for us too. We are invited to share the conviction that Jesus has the last word. We are invited to work for peace and align ourselves with his kingdom;. That means we are to stand out against the powers that be that exploit and contribute to the chaos and stand for the way that Christ would have us follow.

But the sea is still there. There’s still the rest of the journey to make. We have yet to ‘come to the other side’.

But we have a vision to draw on. It’s a wonderful vision. The vision we have of God’s future, then defines for us what we do here and now. Listen carefully to the words of the vision John the divine shares in Revelation 21.

If the vision is that ‘ he will wipe away every tear from their eyes’ then our task is to wipe the tears of those who weep and bring comfort to a hurting world.

If the vision is that mourning and crying and pain will be no more then our task is to comfort those who mourn, to weep with those weep and to alleviate pain in whatever way we can.

In this vision of a new heaven and a new earth, something remarkable happens. The sea is no more.

All that is chaotic, destructive, soul-destorying is simply no more. If that is the vision, then our task is not to be part of the forces of chaos, but to be part of the peace Christ brings to his world
Posted by Felicity and Richard at 1:20 PM No comments: