Be part of the action!

That’s what it takes to tell the Christmas story in 30 seconds!

Or at least that’s what it takes as far as the Churches Advertising Network is concerned!

I guess you like that kind of thing or you loathe it!

One thing I did like was the strap line at the end. It’s what has accompanied the poster that they put into bus shelters too. Be part of the action. 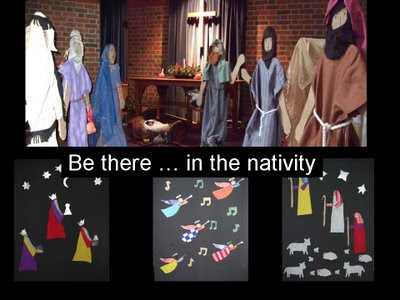 Be there with Mary and Joseph as they have nowhere to go for the birth of the Christ child and find refugee temporarily where the animals are kept, before fleeing as refugees to Egypt.

Be there with the wise men as they follow the star and encounter Herod in all his power, determined not to allow a challenge to his reign.

Be there with the shepherds as they heard the song of the angels, Glory to God in the highest and on earth peace.

Be there in Bethlehem.

That’s what has been in my mind hauntingly this Christmas. 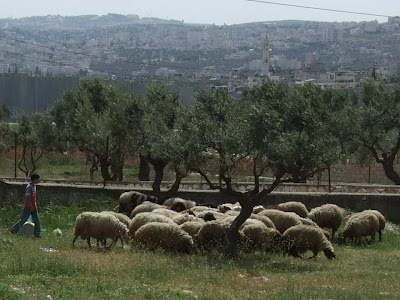 I have seen the Christmas story differently. I have been there. To Bethlehem. I saw a shepherd with his sheep … but between them and the town of Bethlehem, a wall. I went through the wall and touched the pain of the people of Bethlehem. I touched the tension. 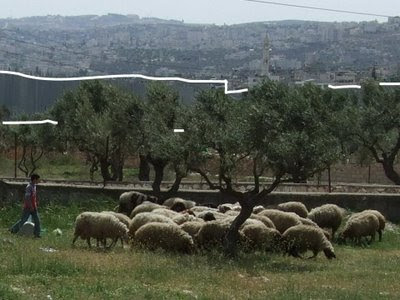 In my mind’s eye I have been there this Christmas.


‘Be there’ … was not the invitation of the advertising campaign. 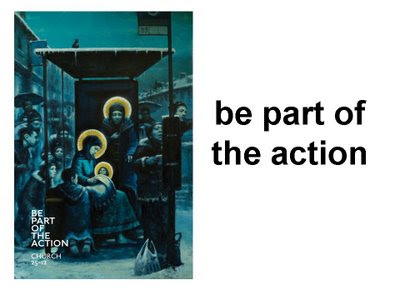 Be part of the action … at a church near you.

That’s the point of Christmas. It is not just to be there, it is to be part of the action.

The Wise men had gifts to share. Be part of the action! We have gifts to share as well – not just our Christmas presents with each other! But the gifts we share for very practical help in Bethlehem.

We have linked up with the Alex Awad and the Shepherd Society, run by the Bethlehem Bible College. Through our giving we are part of the action bringing care and help, food parcels, medical aid, support in jobs and education renewal of utilities in a very troubled town of Bethlehem. 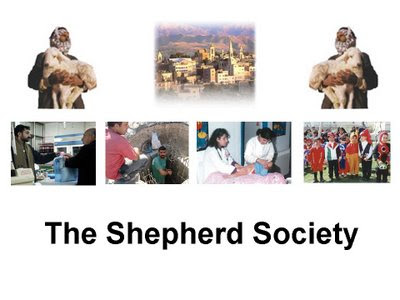 “The blessing of Christmas for Christians today is the same as on the very first Christmas: God sent his son in human flesh to become the Saviour of the world. 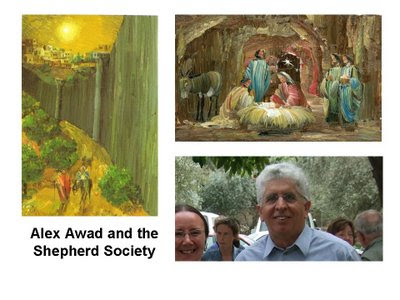 “With the challenges of the wall isolating the city into an island enclave cut off from Jerusalem and the rest of Israel, Bethlehem’s Christians look to their brothers and sisters in Christ around the world for spiritual and moral support. If we could have two wishes this Christmas, the first is that the Christians of Bethlehem and the Holy Land will be encouraged and strengthened spiritually to stay in the land of their birth. The second is to see a peaceful solution to the decade’s long Palestinian/Israeli conflict.

“With this short message of Christmas cheer, hope and goodwill, we wish you a very joyful Christmas and pray that your hearts overflow with bountiful blessings from above.”

Be part of the action – so what is the action that you can take, - an action to bring the love of Christ, the light of his presence, his comfort, his strengthening into the world?
Posted by Felicity and Richard at 9:10 AM No comments:

Put yourself in the place of the shepherds ...

Put yourself in the place of the shepherds and ask yourself the question … how would you feel?

We sing of that glory so often, we think it’s glorious!

But the glory of the Lord was something tangible, special, felt in the holiest of holy places, felt on the mountain top … it was for the Moseses of this world, for the High Priest … not for the shepherds, not out in the fields.

And then the voice of the angel speaks.

‘Do not be afraid; for see—I am bringing you good news of great joy for all the people: 11to you is born this day in the city of David a Saviour, who is the Messiah,* the Lord. 12This will be a sign for you: you will find a child wrapped in bands of cloth and lying in a manger.’ 13


What could that mean? A messiah – a longed for king. Anointed of God – for all the people.


The prophet had been so certain … the day was coming when God’s rule would break in upon his people, and the rule of God would be rule of a great and good shepherd,

Could this be what was happening?

There was more to the message of the angels …

And suddenly there was with the angel a multitude of the heavenly host,* praising God and saying, 14‘Glory to God in the highest heaven, and on earth peace good will among people’
*
In a state of fear?

Hear the word of the angels … Do not be afraid.

Hear again the good news of the coming of Christ.

Know that he comes as the Good Shepherd …

What the shepherds did was to go and find out … they went and saw for themselves and then they had a message to share.

So they went with haste and found Mary and Joseph, and the child lying in the manger. 17When they saw this, they made known what had been told them about this child; 18and all who heard it were amazed at what the shepherds told them. 19

Put yourself in the place of the shepherds … hear the message of the angels, see for yourself … and spread the news.

But what is the message of the angels?

Think for a few moments … and reflect … what is the message the angels have for our world today?


Write that message on your angel …

1 It came upon the midnight clear,
that glorious song of old,
from angels bending near the earth
to touch their harps of gold:
'Glory to God! On earth be peace,
from heaven's all-gracious King!'
The world in solemn stillness lay
to hear the angels sing.

2 Still through the cloven skies they come,
with peaceful wings unfurled;
and still their heavenly music floats
o'er all the weary world:
above its sad and lowly plains
they bend on hovering wing;
and ever o'er its Babel-sounds
the blessed angels sing.

3 Yet with the woes of sin and strife
the world has suffered long;
beneath the angel-strain have rolled
two thousand years of wrong;
and we, at bitter war, hear not
the love-song which they bring:
O hush the noise and end the strife,
to hear the angels sing.

4 For lo, the days are hastening on,
by prophet-bards foretold,
when, with the ever-circling years,
comes round the age of gold;
when peace shall over all the earth
its ancient splendours fling,
and the whole world give back the song
which now the angels sing.