Remember with Humility - a Sermon for Remembrance Sunday

It was another parade of soldiers returning from a tour of duty in Afghanistan. But it was not just another parade. A number of their colleagues were not returning with them. When asked how they felt, one of the officers commented: it’s just a relief to be coming home.

Someone took me on one side after one Remembrance Sunday Service. He had served with the RAF in the second world war. And he said just the same. It was just a relief to come home. 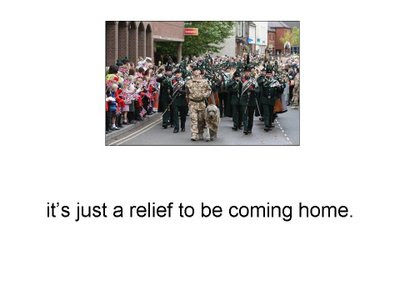 They say of what’s happening in Afghanistan that our forces have not experienced the like since some of the close combat warfare of the first world war. There are only four surviving servicemen from the first world war and the one who was interviewed this week had not got beyond the training camps of Yorkshire having been recruited in the last year of the war.

It is difficult to think that Anne’s mother at 103 was in her teens before that war ended.

Today is a day to remember those who have lost their lives in war … not just long ago, but more recently too. 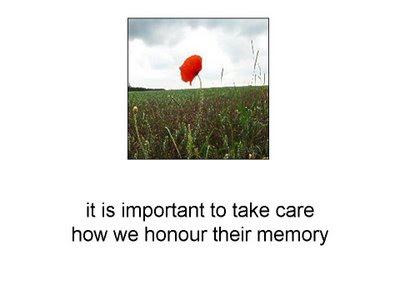 But it is important to take care how we honour their memory. Those who returned from the trenches of the first world war were all too aware of the dangers in remembering in a wrong kind of way.

C.E.Montague served in middle age as a volunteer in those trenches. By June 1919 he was frustrated at the way some remembered.

“There is a part of the population, shallow, luxurious and vulgar-hearted, which seems to be trying as hard as it can to give to English life that special quality often found in Empires that are over-blown and ripe for degradation.

“… a kind of grandiose insoslence of self-indulgence. That part of our population no doubt would find a record glare and blare of noise and illumination very much to its mind. So, perhaps would a few dealers in bunting, rockets and refreshments but scarcely anyone else.”

As the war finished C.E.Montague had had the experience of hearing from the front lines the bells ring out to announce peace.

“An extraordinarily large number of soldiers had the idea that they might first learn that peace had come by hearing a joyful peal of bells from the nearest unruined church tower in their rear. Many of them did hear this, with an effect they are not likely to forget, within a few seconds of the commencement of the Armistice.

“Such men do not want to hear nay more guns or to see any more signal rockets. Still less do they want any such “portions and parcels of the dreadful past” as formal musters and reviews.

“For them the general ringing of bells, one of the most ancient, beautiful, and moving expressions of a common joy, pretty well exhausts all the possibilities of congenial demonstration. You cannot go one better than perfection.

Maybe it is good not only to rejoice with humility, but also to remember with humility and be humble in one’s remembering.

Remembrance Sunday marks the end of that first great war of the twentieth century. It is not without significance that our remembrance marks an ending of war and therefore the beginning of the peace. 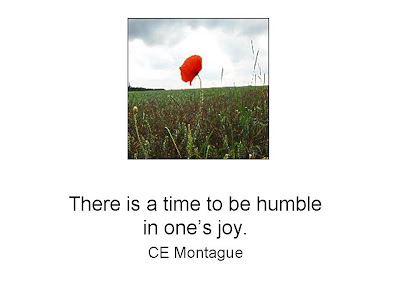 Maybe, the likes of CE Montague were already uneasy about the way the ‘peace’ was being pursued at the end of that war. Maybe how the peace should be pursued should also be the subject of our reflection to honour those who have lost their lives in war.

That’s why that reading from Revelation 22 is so powerful. John the divine, shares with us a vision of a new creation – not just to give us a dream to dream of some far off reality in a distant future of God’s glory. The vision is a vision that shapes what we do in the here and now.

His vision is of a river of the water of life streaming out from God’s presence into the whole of the world. On either side of the river is the tree of life with its twelve kinds of fruit, producing its fruit each month; and the leaves of the tree are for the healing of the nations. 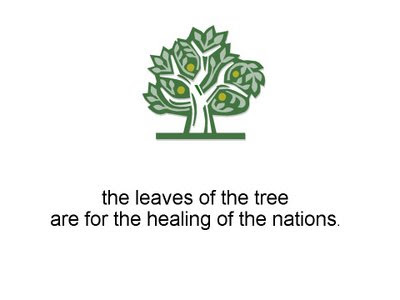 The leaves of the tree are for the healing of the nations … healing, that’s what the nations of the world are constantly in need of. And that is the task that those who share John the divine’s allegiance to Jesus Christ share in the world.

How can healing be brought to the nations … maybe another clue can be found in the words of Micah, echoing many another prophet too.

Out of Zion shall go forth instruction, and the word of the Lord from Jerusalem.

We need to heed the teaching s of the God who will judge between many peoples, and shall arbitrate between strong nations far away.

What form does that judgment take? It is one of the tragedies of the 21st century that religion has once again been drawn on to fuel the rage of war. But Micah has such a very different vision. The teachings of God must be drawn on to shape the peace …

They shall beat their swords into ploughshares, and their spears into pruning hooks; nations shall not lift up sword against nation, neither shall they learn war any more … 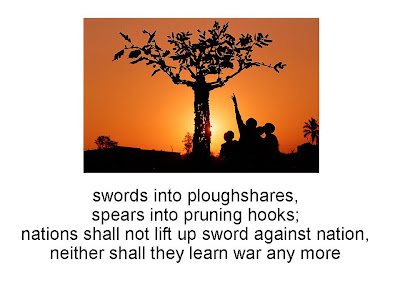 Can it be real?

As news comes from the Congo once more of the horrors of a world gone mad on the ravages of war, the commitment to work for peace is so desperately important and why we shall be having a retiring collection for Christian Aid’s appeal for the people caught up in that humanitarian disaster.

A year ago Felicity visited Mozambique, another African country that has been torn apart by war. That’s what prompted her to share with the children a picture of the tree of life sculpture that was commissioned by the British Museum and by Christian Aid and now stands in the African galleries of the British museum.

“A half tonne sculpture made out of chopped up guns and other decommissioned weapons from Mozambique was created in three months by Mozambican artists and made entirely out of weapons such as AK-47’s, pistols and rocket-propelled grenade launchers. They see it as a way of using their art to promote peace.

“The Transforming Arms into Tools (TAE) project is run by the Christian Council of Mozambique a partner organisation of Christian Aid.

“There are still millions of arms hidden throughout Mozambique – a legacy of the 16 year long civil war that ended in 1992. Bishop Dom Dinis Sengulane, who was involved in the peace negotiations between the Frelimo government and the Renamo rebels in 1992, came up with the idea for a weapons amnesty project that would help people give up
their guns.

“In the last nine years the project, which employs some former child soldiers, has collected and dismantled more than 600,000 weapons.
In exchange for their guns, former combatants are offered building materials, tools and equipment such as sewing machines, bicycles, and ploughs.

“One village received a tractor for handing in 500 weapons.

“After being chopped up and dismantled by TAE staff, these tools of war begin their new life in the hands of Mozambican artists who create sculptures out of them. Their unique pieces of art are exhibited all over the world and include birds of peace, saxophones, chairs, monkeys and even jazz bands. 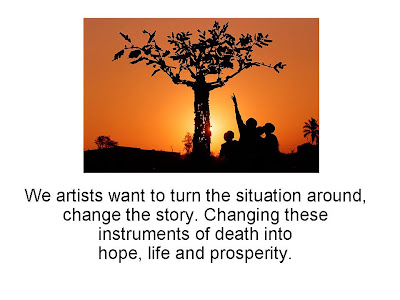 “Hilario Nhatugueja, one of the four sculptors, says: ‘We artists want to turn the situation around, change the story. Changing these instruments of death into hope, life and prosperity. 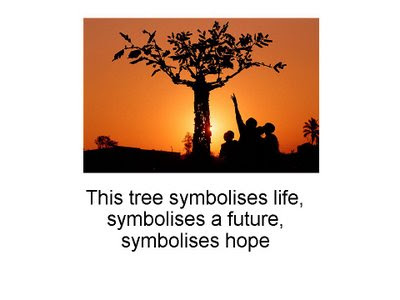 Then, in the words of John Greenleaf Whittier,

Then shall all shackles fall: the stormy clangour
Of wild war music o’er the earth shall cease;
Love shall tread out the baleful fire of anger,
And in its ashes plant the tree of peace.[3] 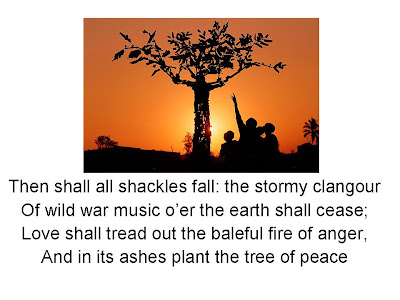 O brother man, fold to thy heart thy brother!
Where pity dwells, the peace of God is there;
To worship rightly is to love each other,
Each smile a hymn, each kindly deed a prayer.

For he whom Jesus loved hath truly spoken:
The holier worship which he deigns to bless
Restores the lost, and binds the spirit broken,
And feeds the widow and the fatherless.

Follow with reverent steps the great example
Of him whose holy work was doing good;
So shall the wide earth seem our Father's temple,
Each loving life a psalm of gratitude.

Then shall all shackles fall; the stormy clangour
Of wild war-music o'er the earth shall cease;
Love shall tread out the baleful fire of anger,
And in its ashes plant the tree of peace.

[1] This leader is attributed to CE Montague, who heard the bells at Moons as a middle-aged volunteer. The Manchester Guardian, June 27th 1919.
[2] www.dfid.gov.uk/aboutDFID/DFIDwork/ppas/christian-treelife.pdf
[3] John Greenleaf Whittier, ‘O brother man, fold to thy heart thy brother’
Posted by Felicity and Richard at 2:16 PM No comments: